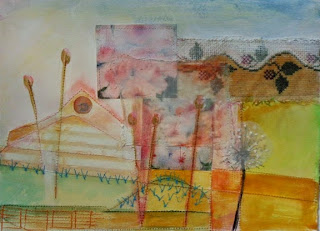 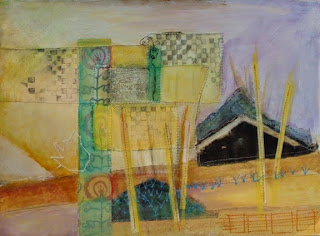 Spring Collage (front and back)

I have talked about my two sided collages from my "Farmscape Series" but have neglected to post both sides of one of them.  Here is a collage from the 4th week in April.
If you follow the geometric aspects of the work you can see where the stitching and collaging on one side influenced what happened on the reverse side.  Usually one side ended up being lighter and brighter than the other.  I would start by collaging elements on one side of the paper, then reversing it to see what I might want to include on the other side.  I would return to the first side and do some painting, then reverse it and work on the other side.  It was a continual back and forth process.
This allowed me to make 2 observations about what was happening on the farm during that particular week.